Anything pertaining to these components will be found here.
1 post • Page 1 of 1

Yesterday I was putting the finals back together. The first brake I did was tight enought once together I could not turn it by hand. I rember someone else had problems with it too. I did not want it to heat up and burn out the seal like I did when I forgott to take the brake off

I used a burr and relived some metal behind the toggle. Bout a 1/8" so I could turn it by hand. The second one

would not go on at all

I was thinking mabe I had the wrong one. When I had taken it apart the pins holding the brake band on the toggle weren't in all the way one was half way out so somone else must have had problems too. I got the bands from IH and I was thinking it could be that the friction material was too thick

I gave up on it last nite before I got too mad and did somthing stupid. This morning I took the brake drum back off and could not even get it on with it off the tractor and fully extended

Well decided to try one thing. I put it in the vice and bent the band where the arrow is in the picture in between 1/8" to 1/4" and it went on without much problem. 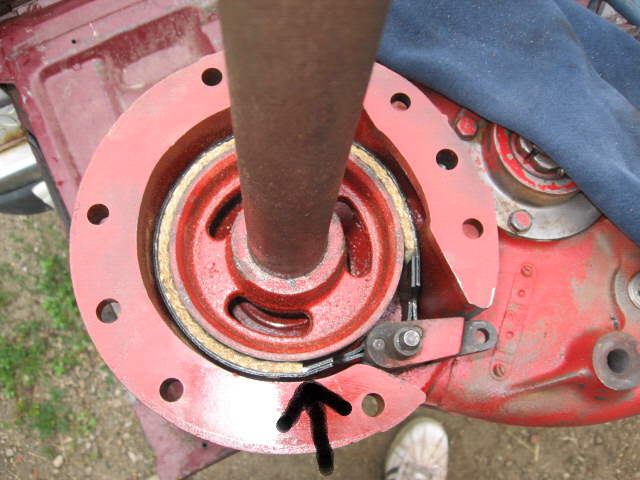 It seems they may not be bent correctly from the factory. I seem to rember their was a slight difference in the ends between both new brake bands. To where I thought their might be a right and left one. Unffourtanly I lost one of the bags they came in and could not compair the numbers.