Some implements (such as a loader) require adding a remote valve to the hydraulic system. There are several ways to do this, with different degrees of complexity and cost, but giving different behavior and capabilities. From these descriptions of several methods and behaviors, you should be able to decide which approach will serve your needs.

Most methods use a hydraulic bypass block added to the Touch Control system. Normal high pressure flow from the hydraulic pump is through the smaller of the 2 manifold tubes into the main Touch-Control block. When a bypass block is added, it fits between the Touch-Control block and the fitting on the end of the manifold. This block has straight through holes everywhere except at the high pressure flow. In this position, there is an L shaped passage that goes in the side of the adapter and into the Touch-Control block. It blocks flow from the manifold. A hose is attached in place of the high pressure plug in the fitting on the end of the manifold. This hose provides flow to any external valves/attachments. The return from the external valves goes back into the port on the side of the adapter. Flow into the adapter then goes to the built-in valves of the Touch Control. The external valve needs to have pressure relief done one way or another. If a hose is connected directly from the high pressure of the manifold into the side of the adapter, the whole system works the same as without the adapter. Pictures of an installed adapter are on the TM Tractor Parts site at Hydraulic By-Pass Block.

The simplest use of the bypass block would be a single 1-way or 2-way valve with pressure relief that dumps into its outlet port. Valves like the Gresen 300 or 400 can be operated this way. An alternative is to use a power beyond valve. A power beyond valve has an additional line. Rather than a single outlet line, the flow from the outlet is split into 2 lines. One is the power beyond that carries the high pressure flow when the valve is in neutral. This line is connected back into the bypass block. The other line carries the return from the remote cylinder. This line will be connected directly to the reservoir. If you want to add an external oil filter, one can be placed in-line on the return to the reservoir.

These 2 methods will act differently from each other if you activate more than 1 circuit at a time. With power beyond, THAT valve will take priority and the rockshaft will stop until the remote valve returns to neutral. With the other system, outflow from the remote valve continues to the Touch-Control system. They will both move at once, but the load on the rockshaft will cause back pressure into the remote valve, reducing the lift capacity accordingly. If trying to lower a one-way cylinder, the cylinder may not drop and may even lift if there is a lot of back pressure on the valve.

A connection similar to the simple one described above can be done without adding a bypass block. However, this method disables the Touch Control rockshaft. Use a simple valve like the ones named above. Input for the valve comes from the high pressure tap on the Touch Control manifold. The outlet from the remote valve is connected to the reservoir filler. To get pressure to the valve, the rockshaft is rotated to the rearmost position. The rockshaft of blocked from moving with a chain or other solid brace. The Touch Control lever is moved fully forward to divert flow to the remote valve.

With any of these methods, if multiple remote valves are needed, a stacked set of valves can be put in place of the single remote valve.

Connecting a line to the Touch Control filler is not always as simple as it might sound. Some Touch-Control filler plugs are pipe thread and are easy to connect a return line to. Others have a hex headed plug with straight threads that requires an odd adapter. IH made one that I don't think is available any more. I made one that was pretty easy and cheap.

First, I needed to find a standard hardware part with matching threads. Turns out that thread can be found on a 5/8 inverted flare tube nut. Now I needed to get from this to 1/2 pipe. Turns out I already had a piece of 5/8 copper tubing with a 1/2 pipe adapter soldered on (removed from the sprinkler system). I cut it to a reasonable length, stuck it through the nut, flared the end and soldered it in place. The flaring was done with a socket in a vise and the soldering was easily done with a MAPP gas torch. (There is no pressure on this connection, so the soldering doesn't even have to be that good.) The remaining problem was sealing the nut into the Touch Control filler. All that took was dropping a 7/8 ID machine bushing over the nut, followed by an o-ring with a 13/16 ID and 1 1/16 OD. That size o-ring is a little tight on the nut to stay in place. Just snug the nut up lightly to install it.

The nut cost $2 (on-line). Unfortunately, the source has a $20 minimum, but I was buying some other parts anyway. The 5/8 tube and pipe thread end came from a pile of used parts, but could have been found at Home Depot for a couple bucks. If I had to buy it, I might have looked for steel rather than copper. The Machine bushing (which was used because it has a slightly smaller hole than a 7/8 flat washer) cost a couple bucks at Tractor Supply. It only cost that much because it came in a bag with 6 more. The o-ring as also on hand, but would be well under another dollar. The o-ring should be nitrile (Buna-N) or viton for oil resistance. O-rings from automotive supply stores usually are nitrile. Plumbing and home supply store o-rings are usually EPDM (good for water, not so good for oil). If I had to buy all the pieces, the whole thing would have been well under $10. I've used it a little and it seems to be working OK. 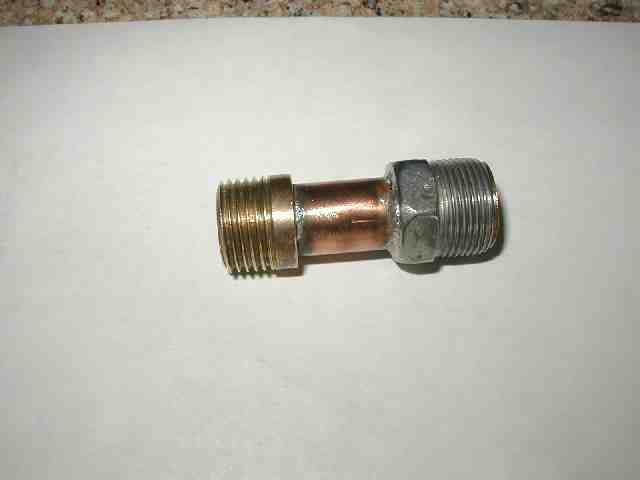 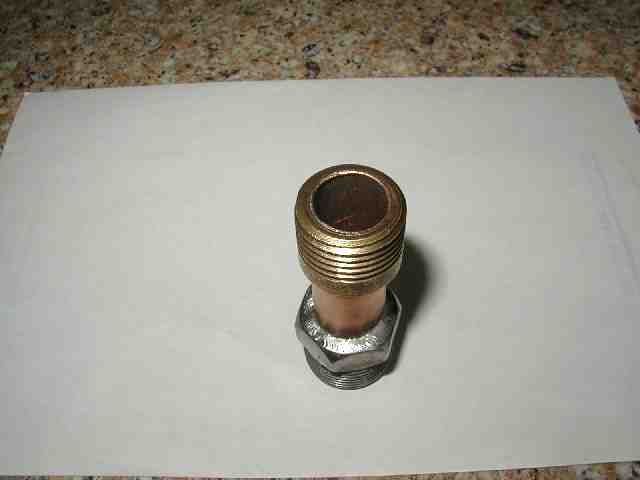 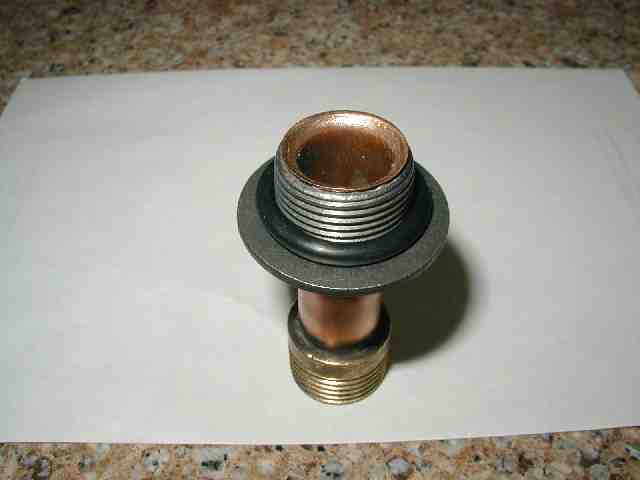