The Cub Club -- Questions and answers to all of your Cub related issues.
Forum rules
Notice: For sale and wanted posts are not allowed in this forum. Please use our free classifieds or one of our site sponsors for your tractor and parts needs.
140 posts

I have been looking at this Cub for a number of weeks. It was located at a small shop. They got the tractor running for me to test out and I picked it up yesterday.

Tractor runs pretty smooth but has some issues mostly related to leaks.

Congrats on your new to you Cub. They are addictive!

The tractor looks fine to me. The repairs you described are usually pretty straight forward, and most of what you are planning, are repairs that I have recently done.

Everyone here has been very helpful, when was unsure, and had questions on my project, and I am sure they are just waiting to help you as well.

One piece of advice that I would give, don't get in a hurry and to shop around.

T M tractor parts has great prices. I bought some of my parts locally, at our Case I H dealer, and paid way more than I should have. Partly trying to shop local and partly out of convenience.

I ended up spending more that I should have. After market parts are one thing, but real I-H parts are the same, except for the price, no matter where you buy them.
A couple pieces that I bought locally was all most double what TM sells for.

Good luck with the project.
Top

That is a nice straight looking Cub.

Many times final drive leaks are because of over filled transmissions. The final drive seals are designed to keep dirt out, not to keep oil in. When the trans oil is at the right level the leaks aren't there. Since you have just drained the trans and, hopefully, filled it to the proper level (3 1/2 pints), your rear end leaks may go away.
There are two ways to get enough Cubs. One is to continue to accumulate more and more. The other is to desire less.
http://www.cubfest.com
http://www.barnyardbash.com - http://www.savethecub.com

Thanks! The transmission was definitely overfilled due to water. I haven’t filled it yet as it was still draining last night.

Overall the cub is pretty straight. I did notice the gas tank/hood look like it fits the long eared dash (extra mounting holes) but the current dash is short eared and some of the holes don’t line up. A lot can happen in 70 years!

Lots to learn about the fitment of the rear main seal and the retainer. Suggest you "Look before you leap" and get up to speed on that subject. TST forum member offers a reasonable service to help eliminate some of the problems. Check his post in THE VINE.
viewtopic.php?f=223&t=112430
Top

Workinprogress wrote:... My first step will be weld up some splitting stand so I can get into that rear main seal.

Obviously I'm biased, but this is my version of a splitting stand. http://www.farmallcub.com/phpBB2/viewtopic.php?f=144&t=60737

There are several versions of splitting stands here. http://www.farmallcub.com/phpBB2/viewforum.php?f=144

Good luck with your Cub.

I loved this tractor then and I still love it now.
Circle of Safety: Y
Location: Columbia, Tennessee

Welcome to the forum Workinprogress.
Good luck with your project and Enjoy Your Ride.
Are We Having Fun Yet ?

Welcome!
In case you are unaware, the old fuel caps were recalled quite a while ago for safety reasons, and you can send off for a free new one here:
https://www.ihgascap.com/

Not sure where your steering is leaking, but one thing you can try before you get into any rebuilding...remove the top fill plug, and make sure the vent is clear. There is a hole that goes from the bottom up toward the top, then about half way it turns 90° and exits out one of the flats.
It's a closed system, and during operation the heat can build pressure if that vent is plugged.
Dale Finch

This is the hole in the plug Dale describes, you may have to wire brush the sides to find it. Make sure you clean the bottom hole as well. I usually clean it with a wire or small drill bit and then spray brake clear through the bottom until it squirts out the side, 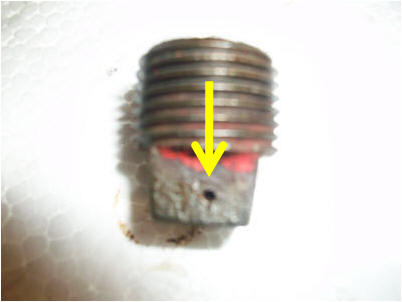 There are two ways to get enough Cubs. One is to continue to accumulate more and more. The other is to desire less.
http://www.cubfest.com
http://www.barnyardbash.com - http://www.savethecub.com

Hi,
It looks like in your picture that Touch Control fluid is running down from the front area of the Touch Control.
The Control Valve could be leaking.

Below is info about the Control Valve, for you, or others with leaking control valves.

If the Touch Control leaks from the front of the unit, the Control Valve o ring could be wornout, and need replacing.
The Touch Control cylinder and piston could be leaking, that is higher up than the control valve.
Use a light, and try to see where it is leaking.

If the Control Valve leaks, fluid could be running around on the bottom cover, and look like the cover is leaking. Wipe off the fluid with a rag, and look closely with a light and see where the fluid first appears.

Below is a listing at TM Tractor showing a new Control Valve o ring, it is a Case IH part, it says. There is a pic there showing where it is.
The valve pulls out the front of the block. You don't need to remove the Touch Control head, on the rear of the block, to replace the control valve o ring.
You may need to remove the 4 bolts that hold the unit onto the clutch housing, the tubes, and the control lever rod, and turn it to the left to get the valve out. You have to lift it some, the bolt heads for the bottom cover would keep it from turning to the side. Or you can remove the unit and set it on your work bench.
You would probably need to remove the starter rod, and the choke rod to remove the unit.
Drain the system first, like the operator's manual says, remove the filler plug, then the drain plug.

Whenever disassembling a Touch Control, it should be clean. Don't allow any dirt or grit inside the unit.
If you need to replace the o ring, clean the area well, and use plenty of Hy-Tran fluid on the o ring and valve, when putting the o ring on the valve, and when putting the valve into the unit again.
Feel the area around the hole for the valve in the block, be sure it is smooth and clean.
Any roughness can cut the new o ring.

If you wanted, if you take the unit off the Cub, you could remove the bottom cover, and clean the strainer. The strainer is visible from the bottom of the unit, but can't be removed from the bottom.
It slides out the head end of the block, after removing the head.
Below is a listing for the strainer at TM Tractor, you can look at the pics and see what it looks like.

The bottom cover has many bolts, and a gasket, the gasket probably would need replacing if you took the cover off. TM Tractor has a new gasket. I would use some sealer on the gasket, it might help prevent seeping over time.

When the bottom cover is off, it should be checked with a straight edge, and straightened if bent.

When you get it to work, remember to fill the unit the last time with the arms in the rear or down position, like the Cub operator's manual says.

Below is a post I made about checking and changing the Touch Control fluid, and removing the air from the system.

Below are pics.
The 1st pic shows fluid leaking from the front area of the Touch Control.
The 2nd pic, from TM Tractor, shows the front of a Touch Control, with the rockshaft off.
The Control Valve is at the lower right, right in the pic.

Thanks for all the great responses.

Rear main seal - I have seen those links and multiple postings on the seal/retainer issues. My plan is to take things slow and split tractor, evaluate, figure solution and then order needed parts.

Touch control - it seems like the front of the unit is leaking. Seems like everything is wet. I suspect the best options is to remove and rebuild. I have to disconnect the pump from the touch control when I split the tractor so I would be part way there.

Steering leak - the leaking seems to be coming from the bolts under the unit that hold together the unit. Haven’t really done an good evaluation just put a pan under it to catch the drips.

Basically the steering was dry when in picked it up. I put gear oil in. Just sitting in the garage (unused) it leaked onto the floor.
1952 Farmall Cub
Cub Cadet 1512 with cadplans loader and backhoe
Cub Cadet 1711
Cub Cadet 782
Cub Cadet 104
Top

I was measuring the tractor to build the splitting stands and pushed on the front axle. The Axle moved forward! Turns out the bolts holding the lower steering housing were loose! Two I could tighten with my fingers and all but one of the others took 1/2 to 3/4 of a turn to tighten.
1952 Farmall Cub
Cub Cadet 1512 with cadplans loader and backhoe
Cub Cadet 1711
Cub Cadet 782
Cub Cadet 104
Top

I also noticed the tractor would really roll. So I decided to check the fluid in the final drive. Removing the fill plug saw some ice! Not believing my eye and thinking I might be wrong I pulled the final drive pan.

I will let the picture show what I found!