Have a safety tip you want to share? Did you or a friend learn it the hard way? Help someone else by posting your tips on tractor, farm, shop, lawn, garden, kitchen, etc., safety.
Forum rules
Safety is an important and often overlooked topic. Make safety a part of your everyday life and let others know how much you care by making their lives safer too. Let the next generation of tractor enthusiasts benefit from your experience, and maybe save a life or appendages.
6 posts • Page 1 of 1

...right in my backyard. 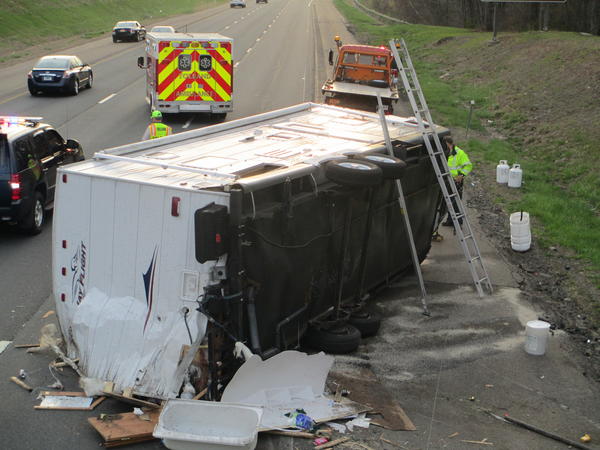 Four people were injured in a rollover on I-84 in Tolland Sunday evening — and the driver was whisked by Life Star helicopter to Hartford Hospital, authorities said.

Steva Buskey, 43, of Oxford was driving a pickup hauling a 26-foot camping trailer westbound in Vernon around 6 p.m. Sunday when the trailer fishtailed, forcing her to loose control of the pickup, police said.

The pickup rolled over at least three times before coming to a stop – rightside up -- on the grassy right shoulder, according to police.

Buskey was transported by helicopter "as a precaution" after complaining of "pain to her entire left side," police said.

The three other occupants were transported by ambulance to Hartford Hospital, according to police.

Troopers identified them as: Kyle Strabomy, 16, of Seymour, and Robert Werden, 45, and Tommy-Lee Buskey, 16, both of the same Oxford address as the driver..

All four passengers suffered minor cuts to their legs and arms, police said.

One of three lanes of the highway remained closed as of 10 p.m.

Photos provided by authorities show a green pickup with its rear smashed and its roof torn off and a white trailer lying on its side.

I could be wrong, but that looks like an F-250 to me.
Don McCombs
MD, Deep Creek Lake

Looks like a F-250. Driver must have made some erratic steering maneuver or the rig wasn't
set up to tow correctly. I hope all will be ok.

Don McCombs wrote:I could be wrong, but that looks like an F-250 to me.

Yep, my bad - that's what I get for looking at news photos on my laptop.

As Russall said, probably some erratic steering or emergency movement. Yesterday was one of those top 10 weather days in CT. Clear blue-sky and hardly any breeze.
As is the case most everywhere, drivers in CT look at a 3 or 4 lane highway as their personal speedway - any lane - any speed.

It's amazing that no one was killed in that one.
Don McCombs
MD, Deep Creek Lake