The Collector's Show & Tell is the place to show off and discuss your favorite collectables with other forum members. Coins, stamps, toys, ephemera, guns, knives, doodads, etc.
11 posts • Page 1 of 1

this may be interesting to some http://cgi.ebay.com/SMALL-CAST-IRON-ANV ... otohosting
One Life , One Love , A Love Supreme

The only thing new is untold history, Harry Truman
Top

I have never seen or heard of an IH anvil.
Anyone else ever seen one of these?

I copied this post from the cub vine at Gary's request. It should generate some interesting discussion.
Bigdog
If you can't fix it with a hammer, you've got an electrical problem.

I have seen them before. You have to watch repos thats what I have been told. They are neat.
In my line of work
" EVERYBODY GOES HOME THE NEXT MORNING"
Top

I'm sure IH had different advertising gimmicks through out the years. $2,000.00 cookie cutters come to mind.

My guess is this was a souvenir paper weight that was available at one time.
Last edited by Barnyard on Wed Jan 14, 2009 4:16 pm, edited 1 time in total.
There are two ways to get enough Cubs. One is to continue to accumulate more and more. The other is to desire less.
http://www.cubfest.com
http://www.barnyardbash.com - http://www.savethecub.com

With 10 available, I would expect them to be reproductions.

This is likely an original if it came out of Carole's husband's collection
http://cgi.ebay.com/International-Harvester-Metal-Anvil_W0QQitemZ110198541848QQihZ001QQcategoryZ831QQtcZphotoQQcmdZViewItemQQ_trksidZp1742.m153.l1262
Last edited by bob in CT on Wed Jan 14, 2009 4:21 pm, edited 1 time in total.
Top

Bob in CT wrote:...This is likely and original if it came out of Carole's husband's collection
http://cgi.ebay.com/International-Harvester-Metal-Anvil_W0QQitemZ110198541848QQihZ001QQcategoryZ831QQtcZphotoQQcmdZViewItemQQ_trksidZp1742.m153.l1262

For $255.00 you would think they would have taken a better picture of it.
There are two ways to get enough Cubs. One is to continue to accumulate more and more. The other is to desire less.
http://www.cubfest.com
http://www.barnyardbash.com - http://www.savethecub.com

I surprises me too. Her stuff is pretty well presented. I gather that her husband had quite a serious collection of rare IH collectibles. I bought a planter plate from her that was used so show different seed cells all in one plate. There were 2 of them and now I am on the hunt for the other one. No bargains, that's for sure.
Top

I'm like the rest of you guys take better pictures. I sold this ice scraper on ebay for 129.02. It came from the Indy plant. Dad worked their for 41 years. Sorry for highjacking this site. 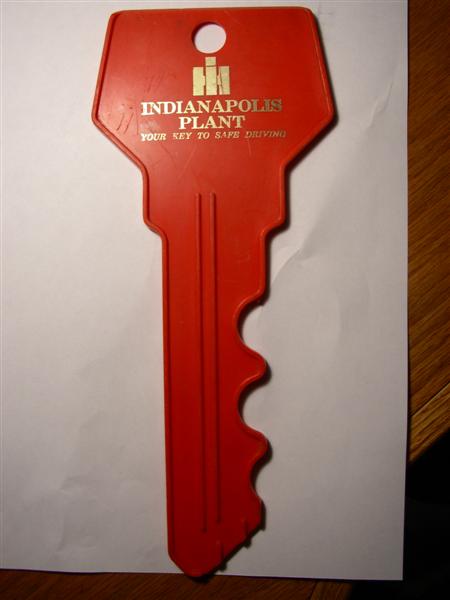 In my line of work

" EVERYBODY GOES HOME THE NEXT MORNING"
Top

The anvils were made by foundry workers during the years at louisville works. I know they were made right around 1974 for sure because I spoke with a foundry worker that used to make them and the cadets. The original he had in his possession was the kind pictured above with the large IH logo. These are the ones that are reproduced. The $255 one is the older style like the one I have. It says Louisville works in letters so small they'd be impossible to reproduce. It's safe to say most of the anvils you see on ebay are reproductions, they even reproduce a john deere version. An original anvil that says louisville works are on average $50-$75. Brandon.

How many of them do you want for $255 a piece? Like Brandon said, there are a lot of reproductions out there (probably more than originals), but a lot of originals also. I have an original one that appears to be cast steel with the small letter "Louisville Works IH", some have a larger IH enblem, some have the emblem and a mans name. There are reproductions out there that are cast in brass, bronze, and cast iron. There was a cast "Liberty Bell" made in 1976. The bell has the frame or rocker (for lack of a better word) on the top, and on one side ot it are the words IH Louisville Plant, and on the same side of the bell it says 1776 above 1976. On the other side of the rocker it says IH Bi Centennial, one above the other. This lettering on the rocker sides is in raised letters, but they were raised by squeezing or pressing the rocker in a die. The originals I have or have seen were cast steel/iron. On the reproductions, the letters are cast, and are usually found in brass or bronze, and like the bears and cadets, the repops are smaller than the originals. You can sometimes get a good buy on a repop, as long as you know it is a repop and not buying it as an original, and if you like it and are willing to pay the asking price, buy it. Just be careful ,and know what you are buying. Click on the picture to enlarge it.
Top
11 posts • Page 1 of 1