This is about grading a yard. But alot of it applys to grading a road too.

Blade Angle: This is simply the angle of the blade whether it is flat or turned to the left or right.
Blade Tilt: This is setting the blade so one side or the other cuts deeper than the other.
Windrow: This is any dirt that comes off of either side of the blade.

ABC Always Be Careful. Work at a slow speed and KEEP YOU FOOT NEAR THE CLUTCH!. If you should hit a rock root or other obstruction. It Can Stop the Tractor Instantly!!!! Worse it can cause Bucking back and forth on the blade. (You don't have to ask how I know this!!)

While using the grader blade you want it solid as possible. If you were to use a chain instead of the original link to the blade. The blade would just ride up and down on as it hit harder and softer material. You would not have any control of the blade. Nor would you "know" where the blade "is" I personally found that the sprig on the 54a gave me too much play. It was ok if I had all loose dirt to work with. But if I was trying to cut something hard when I would come into softer material the blade would shoot down take too deep and stop the tractor. This is because when you are on something hard and pushing down hard the blade rides up on the spring. Then when you come into something soft the spring pushes the blade down to where it should be. I made a lock out plate on my 54a so when I am using it for grading it is solid. And I always "know" where the blade is depth wise.

The first thing you want to do is look at the area you want to work on. Look for how and where the yard drains. You will want to end up with all rain water running away from the house to somewhere that it will not just make a pond. IE to a ditch or natural drain way through a field. You may want look after a hard rain and see how the water runs off and where it goes. Identify any humps or holes that you want to cut down or fill. Lets say there is a area that is a foot higher than than another and you regularly get a pond there when it rains. This does not mean you need to cut out a foot to get it to drain. What you would want to do is take the high spot and fill the low spot. This might mean taking six inches off of the high spot and putting it in the low spot.

Now you need to decide how you are going to get the tractor in there and use it. Remember the blade is in the center of the tractor. Which is about four foot from the front of the tractor. So if you are pushing strait at the house or a fence. You will end up with a pile of dirt five or six feet from it. I prefer to have a long strait path for the tractor with no obstructions at either end. Also if you have a gravel driveway like I do I like to have the yard at least five inches lower than the driveway. This allows the water to run off of the drive and drain out through the driveway. Generally this means working parallel to the house.

If you are not sure it will drain well (many times it is very hard to tell). You may want to wait for it to rain first and see how it drains before seeding. I did. If it doesn't rember where the parts you don't like are and go back in and fix them.

Trees. You do not want to add more than a inch or two of dirt to the area of the drip line of the tree to the trunk. There are roots there that need air. If you add too much dirt there you may kill the tree.

Generally we will be working with the blade flat (no Tilt). This means that that if you were sitting on a perfectly flat driveway the blade would be flat on the driveway. Now if you were to start grading with one tire in a hole the blade will cut deeper on one side making the hole longer. Since we do not have power tilt on the blade where if the tractor is not flat on the surface we want to work then correct as the tractor comes flat. We first need to make a flat area to work off of. This area need to be big enough to put the back tires on up to past the front of the blade.So you may want to make a few passes at 90 deg to the direction you want to work. Then back up onto with the rear tires and blade on that flat spot and work your way out from there. You do not want to come off of the driveway then down into the lawn area as you would have drop the blade then raise it as you come off of the drive way. As it tend to start you making waves that keep getting worse as the rear tires hit each wave.

Yes your Cub will talk to you! It will tell you what its doing but you have to feel it. If the front end goes down into a hole you need to raise the blade. If it goes up you need to lower the blade. While you will be watching what you are doing you need to feel what you are doing too. If you should make a gouge (happens to me all the time) You can lift the blade drive forward drop the blade and pull some of the dirt back and into the hole. Lift the blade still backing up. Stop put the blade back down behind any extra dirt. The start going forward again bing carefull to control the blade as the front tires go up and down over any pile of dirt infront of them.


You also want to carry dirt on the blade at all times so that when you hit a low spot the dirt on the blade will fill the holes. Or else when the rear tires come to the hole they go down into the hole which make the blade cut deeper and you start making waves again as you try to correct it.For leveling a large area like a lawn. I prefer to angle the blade sharply and roll the dirt into a windrow and carry it across the area you are working. After the first pass take that windrow put it in the center of the blade and keep carrying it over until you are done with your area. and when you are done just feather that windrow out into the yard.

While you are roughing in the yard don't worry about little windrows coming off opposite side of the blade when you are moving a lot of dirt. After you make you first heavy passes come back latter and make a light pass to clean it up.

Say you are working east to west you may have to make a few passes that way then flip the angle on the blade then work a few passes west to east. As each pass will push you windrow out 4-6 feet in the direction you are travailing in. To get it really flat you may have to work it all north to south too.

Since you are going to till it it is going to be really soft and loose for the first pass until you get some compaction into the soil. That will make lift and drop in soft spots. Plus any clumps of grass will get catch under the blade leaving little gouges. But windrowing will help with that and you may end up with a windrow or grass with no dirt on it. Also if it is too wet you can't do much with it. Nor is dust dry helpful either.

Don't try to go fast you need time to get used raising and lower the blade as the tractor goes up and down. On my finish pass I an usually going in 1st gear half throttle and just carry a windrow 4-5 inches high. how big of a windrow you want to carry when you are roughing it in depends on how much dirt you need to get all the holes filled in and moved around to where you want it. Get off the tractor from time to time and stand back and look at it from different angles to determine any low spots and that you have drainage away from the house to where you want it to drain to. When I did my yard I had to run dirt up to the house and raise the grade at the house 6" to get my drainage right. I was told by a guy that does foundations that I should have the dirt grade at the house one foot higher than the yard and have that one foot drop off over 4-5 feet to the yard level. To have rain water drain away from the house. To protect the basement wall and help keep the basement dry.

You have prob ally seen this before but this is my yard after I got it finished graded. 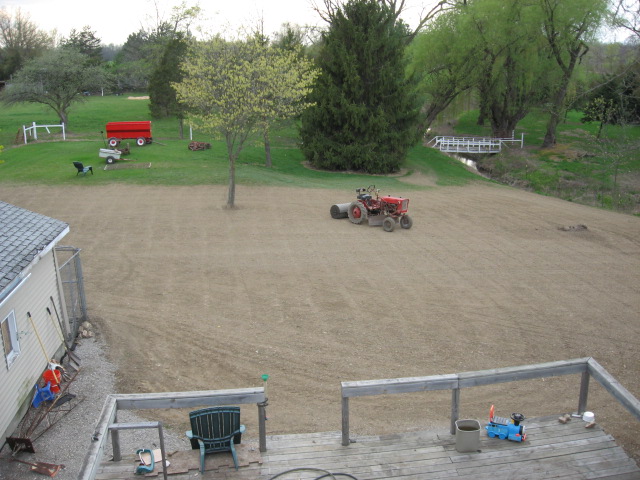 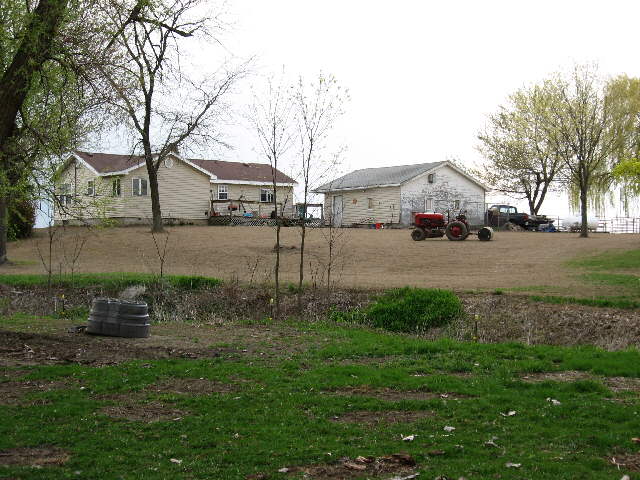