Forum rules
Notice: For sale and wanted posts are not allowed in this forum. Please use our free classifieds or one of our site sponsors for your tractor and parts needs.
40 posts

Just ordered 2 new front tires. Do they have to have tubes? Or can I just run them tubeless? Thanks
“The worst was the best at the time”
Top

You will need tubes.
Jim

Ok thanks
“The worst was the best at the time”
Top

Make shure they have the stems on the side
Christopher Milow
,getting to Know Jesus
better as my Friend every day
I thank him for his love and grace

Make shure they have the stems on the side I chatted with a Tire dude at a farmall shoe this summe and he said that most tubes in fleet farm or hardware stores arnt made that way. The rim hole for sten is to the side of rim and thats why the tubes i was buying kept leaking the new ones from him work great. I think they are made by firestone
Christopher Milow
,getting to Know Jesus
better as my Friend every day
I thank him for his love and grace

If you go with tubes, I would also recommend you get a what is called a Rim Hole Bushing to keep the smaller valve stem centered in the larger valve stem hole in the rim. It will probably prolong your tube by keeping the valve stem more stationary.

Just to make sure I got the right tubes with the properly oriented valve stem, I ordered them either from TM or Miller Tire. Miller also has the Rim Hole Bushing.

Not sure how you plan to mount them, but I got 2 $6.99 tire irons from Harbor Freight. Dishwashing liquid and water to make the bead slippery and a lot of baby powder inside the tire to help the tube to slide into place. Youtube videos help. I’ve mounted 6 front tires with no leaks. The key is to get the bead deep into the center of the rim before you use the tire irons to pry it over the rim.
Top

Most of my tire repair, assembly stuff comes from www.patchboy.com
I'm technically misunderstood at times i guess its been this way my whole life so why should it change now.
Top

Here's a generalized example of the difference between tube type and tubeless rims. Note that not only is the rim different but also the bead of the tire. 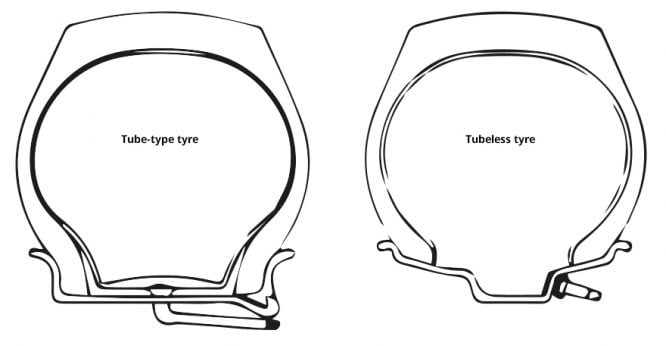 Radioguy, your example pertains to truck tires. What is referred to as tubeless is the tapered seat wheel and tire, which are 1/2" size wheels such as the old 16.5", 19.5" and 22.5" All even inch size wheels and tires are the straight bead wheel referenced as tube type in your illustration. None of that applies to the Cub wheels, (or automotive in general) If the Cub wheels are in nice condition and the tires are labeled as "tubeless", you most certainly can mount them tubeless.
Top

The previous illustration shows truck but it applies to all automotive wheels as well as motorcycle. A tubeless wheel has a bead lock that tube type wheels do not and that applies to all vehicular wheels. That's been true since tubeless tires became a standard in the 1950's. That doesn't mean it won't work but it doesn't mean it's a good idea either. The illustration below shows the bead lock on a tubeless rim that a tube type does not have.

I spent 20 years in the industry. We never mounted tubeless tires without tubes on tube type rims as per the mfg's instruction (liability concerns). Tests had shown that hitting a pothole, or a rock, or even bumping a curb could easily break the bead in that configuration. Now it likely wouldn't happen on a tractor (too slow) but tests had also shown that taking a curve at high speed could produce enough tire roll for the bead to break in that configuration. There's a reason those bead locks were designed into tubeless rims.

I always say put tubes in any tire, tractor, mower, trailer or anything that sits for a period of time because most will go down after it sits for awhile
Top

Assuming you are going to install the tires yourself, you will spend a lot of time trying to get the tires to seal without tubes. I tried every trick in the book, and still had no success. Then put the tubes in and happy ever since. I really see no disadvantages to using tubes.
Bill VanHooser

Snuffdipper wrote:Wow 1/2 say use tubes 1/2 say you don’t have too. Not sure what to do lol

I have a LoBoy with tubeless tires on for 30+ years and a Farmall Cub with tubes and the rim hole bushing for way longer. You need another Cub to do the same and cover all bases. Problem solved