Why won't it fire?

The Cub Club -- Questions and answers to all of your Cub related issues.
Forum rules
Notice: For sale and wanted posts are not allowed in this forum. Please use our free classifieds or one of our site sponsors for your tractor and parts needs.
56 posts

New member who's been asked to get a Cub running

just a quick intro from me.
A neighbour found out I fix things, and they asked if I'd have a look at a cub they've been trying to get running for a while.
I thought why not, as it surely can't be much stopping it from running.

I've now spent 3 nights on it, and the most I've had out it, is a couple backfires..
Top

Why won't it fire?

This is turning in to a bit of a saga.

My neighbour asked me to have a look at a 1948 Cub she's had for a while, but never been able to get running, despite fitting a new wiring loom and magneto.

I think the 6V battery fitted to it is pretty much dead, as even having been on charge for a couple days, it struggles to even kick the starter motor, and drops to 3V when cranking.
As a temporary solution to get the engine to crank, I'm using a 12V battery and set of jump leads, and the engine is cranking around the speed I'd expect it, which has me wondering if it really is 6V. Especially as tonight in amongst various bits of paper, I found that the tractor previously had a 12V battery fitted, so I'm now wondering if somebody has converted it at some point.

Next issue is fuel. Put some fuel in, and it proceeded to run out the carb. Not just drip, run.
Found that the carb has had new jets/valves fitted, but the wrong float needle fitted. Found the correct one in amongst the random box of bits also with the tractor. I done this with the carb still fitted, and I suspect the fuel level is too high, as fuel drips out when you crank with the choke closed.
However, I would still expect some form of life.
Removing the spark plugs shows they're dry, so too much fuel isn't stopping it from firing.

Checked the spark, and it's getting a good spark.
However, I eventually checked tonight, and the magneto had been installed half a turn out.
Fixed that, and adjusted ignition timing as per the manual, but still not even an attempt at firing.

I've tried leaving the fuel tank turned off, removing a couple spark plugs and pouring a bit petrol in the holes, refitting the plugs and still not even so much as a kick.

Valve clearances look OK. Valve timing appears OK, as cylinders 1 and 4 intake/exhaust valves close/open as the engine passes the TDC mark.
The engine sucks in through the intake, and blows out through the exhaust, so there doesn't appear to be anything major wrong.

I've even tried a LPG bottle and roofing torch wedged in the intake, but even that doesn't cause it to kick.

So as far as I can tell, the engine has all the ingredients it should need to at least fire, but it just won't.

Has anybody got any suggestions?
Top

If it won't fire on LPG, and you are getting spark, it must be the timing. Using LPG is bypassing the carb, and sending fuelmix into the engine. A spark at the right time, and it should run.

Hi,
It would be helpful to identify what Cub you have.

Below is a pic from TM Tractor of a Cub 6 volt starter, it has the switch on top of it, and a rod to the dash that you pull. It says Delco on the plate on it.

The Cub 12 volt starter has no switch on top of it, or rod to the dash.
People often use the 6 volt starter with a 12 volt battery.

The French Cubs originally have a different carburetor than a USA Cub.

Below is a pic from TM Tractor of the IH J4 magneto the USA Cubs used.

I'd crank less and study configurations more.
Really . There's folks 'll drag one about trying to get er to run , (no offense to those who do ) but when things are right it'll go...

You're not using a hand crank? It can help confirm magneto is snappin where it should.
Saves the crankin too.

One thing I'd want to study (and I'm not saying you have not) is the kill/ignition switch. It's contacts , and the circuit and connection to the mag..
Boy howdy she won't go if the mag is grounded.(!)
I had one switch that just quit working. It had been hard to pull on for a while first , but when it quit working ,mag stayed grounded.

Your plugs read like they're dry for all the cranking. Usually gas needs shut off if cranked more than a few seconds a couple tries or they get plenty/ too wet. That will vary with carb set ups , but I'd have to study your fuel system delivery a little more.
A IH carb on either of my Cubs will leak fuel if it's getting to be a no start proposition.
Fortunately it's been a while since having problems ( Knock on wood) after working on them. But my fuel delivery has been good all along , with wet plugs on no starts. No start meaning cranking on it for more than several seconds and it don't pop off.

If a shot of carb cleaner (in place of ether for starting fluid which is not ideal if used much) does not get it to fire , something is still wrong.

Where are you getting good spark? If it's hot blue at the plugs , it's time to question fuel flow. Screen at carb plugged, or something in the carb .

Don't know what coil set up your Cub has.(Stock? or modified. 12V or 6V) It too could be suspect. (A stock 6V coil and points will suffer under a 12V battery .)
Top

If the tractor has been sitting for some time, stuck valves.

Conduct compression tests, dry then wet.
I have an excuse. CRS.
Top

Double check the plug wire order. The plugs are #1 to 4, front to back, and the distributor firing order is 1, 3, 4, 2 starting at about 1 o'clock, looking at the dist. cap from the rear. If those are correct, then ask again...we can make up LOTS of answers!!!

If it is getting a good spark at the plugs, is timed correctly, and gas is put directly in the cylinders it should at least pop and spit when cranked over if it has compression. Compression test is probably in order. You should be able to do a quick check by rotating the engine with a finger on the spark plug ports like you do when finding TDC. Many 6 volt cubs were converted to 12 volt while retaining the 6 volt starter. This practice doesn’t seem to cause problems with the starter. Magneto ignitions being independent of the battery don’t care what voltage cranks the tractor. Lights on the other hand are voltage specific
Top 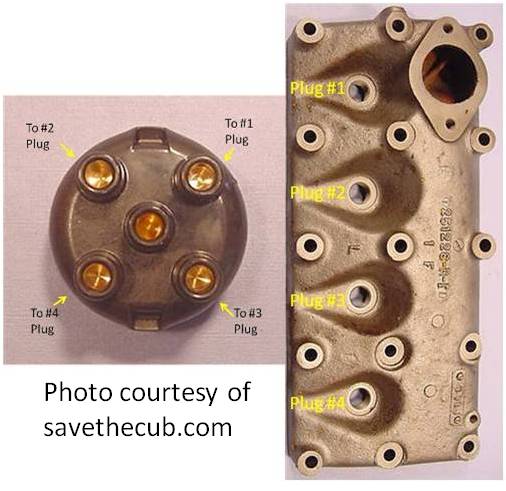 There are two ways to get enough Cubs. One is to continue to accumulate more and more. The other is to desire less.
http://www.cubfest.com
http://www.barnyardbash.com - http://www.savethecub.com

To answer some of the questions.

It's a USA built FCUB according the plate.
It's a 6V starter motor, but I have no idea about the charging, as I've not had the bonnet off to see if there's anything written on the generator.
The magneto was 180deg out, but changing that hasn't done anything.
I've also checked the leads are in the correct order.
It's getting a nice blue spark at the plugs, and using a couple ignition spark testers (these - https://www.amazon.co.uk/Laser-2780-Ign ... 003AN1VPW/ ) there is sparking.

Valves don't seem to be obviously stuck (I took the valve cover off to make finding cylinder 1 compression stroke easier), as all the followers are moving, and clearances look ok when valves are closed.
It does look like there's been a new head gasket fitted, but I can't really see how that could cause issues.

I'll try and get a compression tester into it later, and see if that reveals anything.
The only concern I do have, is the starter motor does sound a bit dry when cranking, so I suspect it would benefit from a strip, clean, and some grease applied to bushings, but that's not going to stop it from firing.
Top

I have spent literally hours chasing a timing problem, and that is what yours sounds like by the descriptions given. First insure the magneto drive lugs are at the approximate clock face locations of 2 and 8, as viewed from operator seat. With a magneto, you cannot overcome a governor drive that is installed incorrectly (you can with a distributor). Then confirm that the internal magneto pinion and rotor are timed to each other, there are cast marks. Usually the drive pinion has a dot or star, etc at one tooth, and the rotor has a cast-in scribe line. Those must align. Lastly, insure you don't install the magneto 90 or 180 off, it's easy to do because the rotor will not truly line up to the spark plug tower due to the impulse mechanism. So it should be aligned slightly before #1 tower, then installed and timed as noted on this forum. Insure the engine is at TDC, push the magneto body all the way to the engine block, snug it down, rotate engine one revolution back to TDC (even though that is not cylinder 1, it will work fine), roll magneto away from engine slowly until the impulse trips. Lock it down right there.
Rick Spivey
'52 Cub ("Great Personality") 148xxx
'48 Cub with FH ("Gunny Cub") 38xxx
'57 Lambretta (a slow work in progress)
'74 Triumph TR6 (Mama's toy)
Top

By the way the 6 volt battery is bad.

Conduct the compression tests. You need to eliminate one possibility of the engine not starting at a time. No or poor compression - no start.
I have an excuse. CRS.
Top

One thing that was touched on but not d3tailed is the ground wire to the mag from the on/off switch. Just for the sake of argument, and l know you said you have spark at the plugs, but try disconnecting the wire at the mag. Then attempt.

If you haven't checked the '47 or '49 manual on the mag and timing, you should. I mean no disrespect, but sometimes we can miss a small detail that will make all the difference. As Ricky Racer said, go back and check the timing again. If it were me l'd go step by step from the location of the governor notches, the point gap, the rotor location and timing. At least double or triple checking that will take the mag out of the equasion and you can move on to the next steps of fuel and compression.

If you feel good suction at the carb air intake, you have sufficient compression for it to run.