The Cub Club -- Questions and answers to all of your Cub related issues.
Forum rules
Notice: For sale and wanted posts are not allowed in this forum. Please use our free classifieds or one of our site sponsors for your tractor and parts needs.
7 posts • Page 1 of 1

Hello All, New Member Here. I Have a 1970 Cub and the touch control hydraulic unit has a casting hole on the top surface of reservoir near the fluid fill plug. There is a domed shaped plug that covers the hole in the casting. The plastic cap is broken. I've tried to locate the part number in several attempts with no luck. no manuals or diagrams show this plug & dealer has no record of there even being a hole & cap in the top of Reservoir. Ant information someone could provide would be appreciated. Thanks.
Top

I assume that the round plug at the right-center of the following photo is what you are referring to. That is a Welch plug and should be available at most good auto parts stores or from TM Tractor Parts. 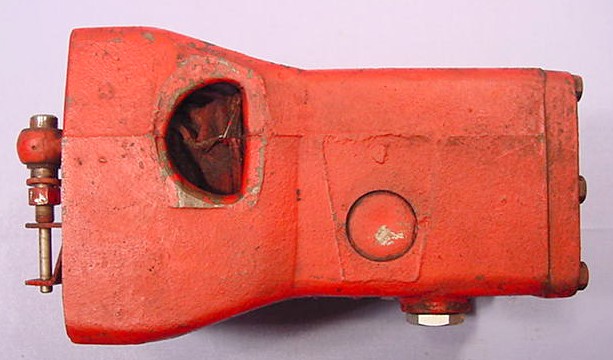 Hi,
The pic Don posted above is how they look. I don't know what plastic plug you are talking about.
The filler plug is metal.

My 55 LoBoy had a hand carved wooden plug in that hole when I got it.
Top

Hi,
The Cub parts manual says on the Touch Control with block number 360719R1, the filler plug is the same number as the oil pan drain plug, for engines serial number 123700 and above. They both use an IH part number 445096 plug, and a 3405H gasket for the plug. They are 7/8", 18 thread.
TM Tractor has the plug and gasket for the engine oil pan, it is the same part number the Touch Control uses.