Got a project that you are working on that is not a tractor? Maybe a barn to hold your tractors or just fun stuff like woodworking, glass, tools, sheds, gardens, custom implements, etc., this is the place to talk about it.

Saturday morning was plumbing day. Had to take Ellie to Princess to get the plumbing done. Mostly cause with me having next to no experience plumbing hydraulics, what I had wasn't exactly the best setup, in fact it was kinda rinky dink to be blunt. But.. that is part of the learning curve. Gotta mess up a few times before you get it right.

Saturday morning was not exactly a great day. Friday it rained cats and dogs.. in fact Moncton got the most rain over the weekend from the 1st Nor' Easter of the season. Almost 50mm Friday and Saturday was shaping up to be cold and wet. The first job of the day was to get Ellie up on Ray's float. As you can see, the float is almost 4 feet off of the ground. Ellie was a litter rear heavy which meant that she had to be backed up the ramps onto the float.

Can anyone tell what the problems are going to be

I know I didn't think of it until it happened.

1st, the ramps were wet. 2nd, Ellie's rears were wet too. 3rd, .. with a gravity fed fuel system, horizontal is best or maybe even a slight incline. An almost 35 degree incline front to rear is not exactly ideal. What happened was a rather quick fuel starvation event. So just as Ellie would get to the top of the ramps.. she would stall and die. Tried it 4 times before we gave up

However, having an auger truck does have it's advantages. Ray simply hooked on to Ellie's drawbar and winched her up on the deck. So... in a rather unorthodox way, I loaded Ellie onto a float for the very first time

After a quick stop for breakfast at Timmy's, Ray and I got to Princess shortly after 9am. Did I mention this is my favourite department store

Ray and I ended up leaving around 5pm. It was a cold, wet and very busy day. What normally would have taken about 2 - 3 hours ended up taking most of the day as every time Dennis went back into the store to get a part or cut/crimp a hose he would be accosted by another half dozen customers... which meant Ray and I ended up waiting a lot. It was ok as it gave me time to play and install all the hoses. The only problem was that it was too wet to leave orifices open very long nor was it conducive to taking pics as we went along.

Leo - Hydraulic Team Leader, has been helping me with putting together both my hydraulic projects. As Rick walked me through the hydraulic blade project, Leo helped me with the parts I needed to source locally and he made all of the hoses for me. He has also been instrumental along with Larry the Asst. Mgr of Princess in helping me source the other items I needed at the great deals I got on the beam and the cylinder as well as the rest of the stock.

So, I figured, Leo deserved a pic with Ellie

Monday was a busy day with appointments so I didn't get to take the pics I was lacking, so Tuesday morning it was bright and crisp out. 0c or about a balmy 32F or just about the perfect

One of the things I wanted to do was to improve how the hydraulics were setup given what I had. So below will be some before and some after pics to document what I did in improving (I hope) the system.

I am trying to find a pic of the jumpers that I have been using for the front end of the system. With the pressure relief valve now, I am not sure that I need them, but since I do not understand that, I am going to keep using the jumpers just to be safe. With the open centre valves.. I somehow think that the jumpers might be a good idea. Comments are always welcome.

This is a before pic of the Pressure Relief Valve, the Cessna Eaton, and the mish-mash plumbing. More of it can be seen in the More Seat Time thread

Thanks to Rick Prentice, I actually was able to understand how this all went together as seen in the pics above. Again from the previous More Seat Time thread .. 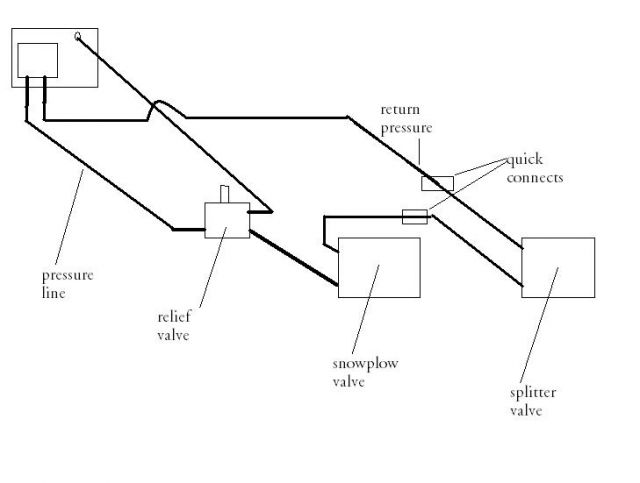 The cylinder is all plumbed.

Valve is plumbed and has actual bushings in place of the washers.

and , Voila! the finished splitter.

Now, here it is Thursday and a number of things have happened since Tuesday. Some of the concerns that were raised in the previous threads have not fallen on deaf ears. I have decided that yup, yes indeedy this new system definitely needs an auxillary reservoir and that was the focus of today's playtime. And will be described in Part 4. This has become a huge project for me. There are over 140 pictures alone to document so far and I have yet to split a single piece of wood.

NB: Please note that there had been a revision to the hydraulic system setup. Consult the Building A Cub Mounted Wood Splitter - Part 3 in the How To Forum.