How I Changed My Leveling & Grader Blade into a Snowplow

Got a project that you are working on that is not a tractor? Maybe a barn to hold your tractors or just fun stuff like woodworking, glass, tools, sheds, gardens, custom implements, etc., this is the place to talk about it.
1 post • Page 1 of 1

How I Changed My Leveling & Grader Blade into a Snowplow

My problem:
To many times while plowing snow either in my driveway or my neighbors, I have caught an edge of pavement, frozen ground, rock and last week a tree root bringing the Cub to an abrupt stop, nearly sending me over the steering wheel. It is an unpleasant experience at best but every time it happens, I cringe worrying that I may break the lower tank which suspends the front axle hanger or the torque tube where the Cub 54A grader blade attaches. Either of those would be a major problem requiring a tear down and the purchase of new castings ($$$). If the plow frame were to break that could be repaired easier but it would still be a hassle, just ask Rudi.

My observation:
Looking at a wide variety of snowplows they all share one feature, a trip mechanism to allow the blade to trip upon contact with anything that impedes its travel then a spring return to the plowing position. This is true whether the snowplow is for a pick-up, tractor, garden tractor, ATV or skid steer. The Cub 54 and 54A Grader and Leveling blade is just that, a grader and leveling blade that is used by most of us as a snowplow. It is made to move dirt and not snow. Typically when you are grading or moving dirt, it is done at low speed usually in first gear. Also while grading you can see exactly (for the most part) what you are contacting with the blade. Pushing snow you need some speed usually 2nd gear or sometimes 3rd gear to use momentum to both roll the snow off the blade better and to overcome low traction that is incumbent to snow on the ground. The presents of the snow hides what ever may be underneath so you are never sure what your blade will be coming into contact with.

My solution:
I set out to add a trip mechanism to my 54A blade. When I first decided to do this project, my plan was to try to make a fairly simple bolt on kit that I could package and market to other Cub owners with all the needed components to modify their blades. By the time that I had a working design though it was a little beyond a simple bolt on kit. A little blacksmithing is required to copy what I currently have. Others will improve upon what I have done Iâ€™m sure as there are some really talented folks here. The pictures below are from my preliminary design which was kind of thrown together to see if it would work and will be tidied up a bit and a few changes made by the time Iâ€™m done.

Examining existing snowplow designs one thing was evident, the pivot point needed to be closer to the blade cutting edge increasing the force required to tip the blade over while increasing the leverage (decreasing the force required) for the return springs to right the blade after it has been tipped. To achieve this, the grader blade pivot point had to be lowered. The blades attachment point has 5 possible pivot pin locations. These multiple pivot pin locations are provided to pitch the blade while grading. The problem is the curvature of the brackets that work so well when you are pitching the blade wonâ€™t allow you to drop the angle support bracket (thatâ€™s what it is called in the Leveling and Grader Blade manual) down to the bottom holes where it needs to be for this modification. This is where the blacksmithing comes in.
To allow the brackets to be used I had to make a cut in the angle bracket as close to the blade as I could on the lower side of the bracket (see photo). The cut was about 2 Â½ inches up from the bottom of the bracket. Once the cut was made, I was able to spread the brackets out to the same width as the center of the bracket. Spreading the bracket was done by giving it a whack or two with a big hammer. This allowed the angle support bracket to be mounted to the lowest holes in the blade. After the cuts were made and the brackets spread, those cuts were welded up to gain full strength of the brackets. 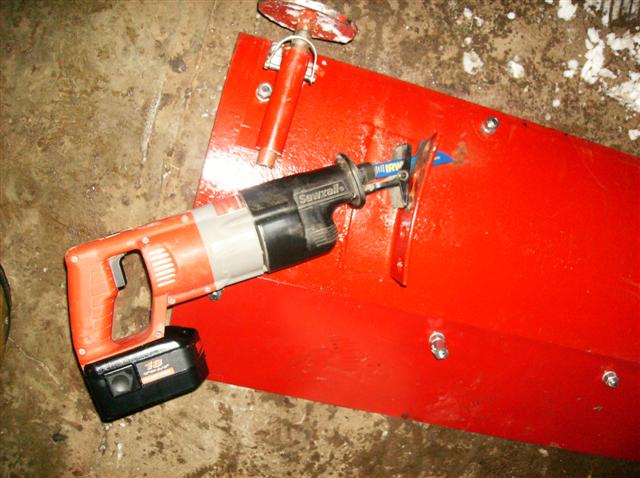 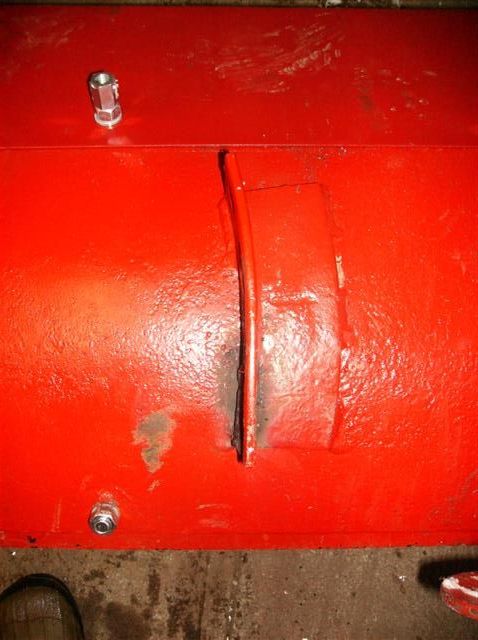 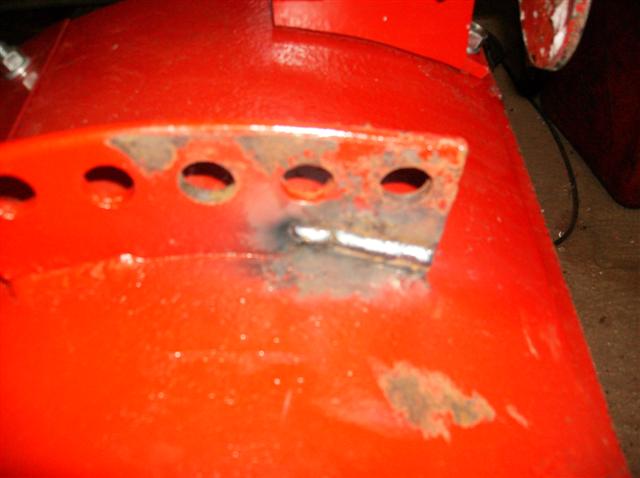 Because the blade is effectively raised by mounting it in the lower holes, the linkage needs to be altered to let the angle support bracket set lower than it previously did or the blade wonâ€™t touch the ground. My linkage did not pose a problem as it has 3 holes to use and all I had to do was move up 1 hole and insert a shoulder bolt and I was in business. Using a 54 or some 54A linkage may require a little more modification. 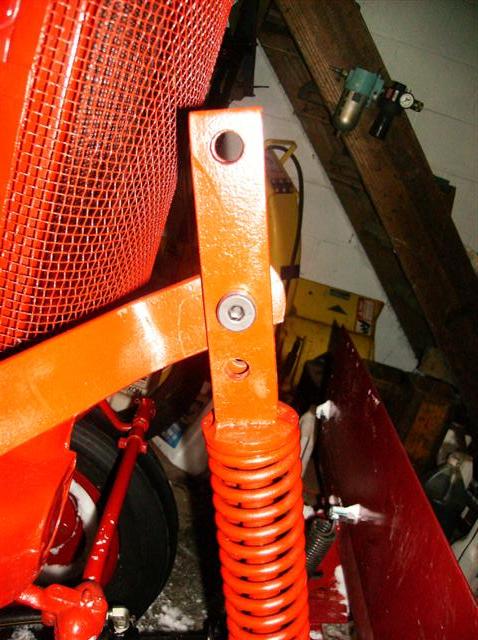 This snowplow modification also calls for the removal of the relief spring on the underside of the grader blade. In its place I have used a simple angle iron bracket to secure a 3/8â€ eye bolt and a short length of chain. The purpose of this assembly is to stop the springs from flipping the blade all the way back to the lifting mechanism. The pitch of the blade, fore or aft is adjusted by varying the chain links and then fine adjustment is made with the eye bolt. The angle iron bracket is attached to the same location as the relief spring bracket and the end link of the chain attaches to the blade in the same yoke that held the other end of the relief spring simply by inserting the attaching pin through the link. 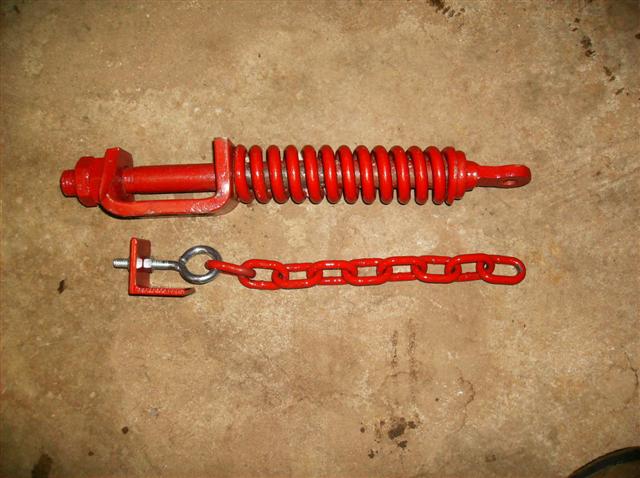 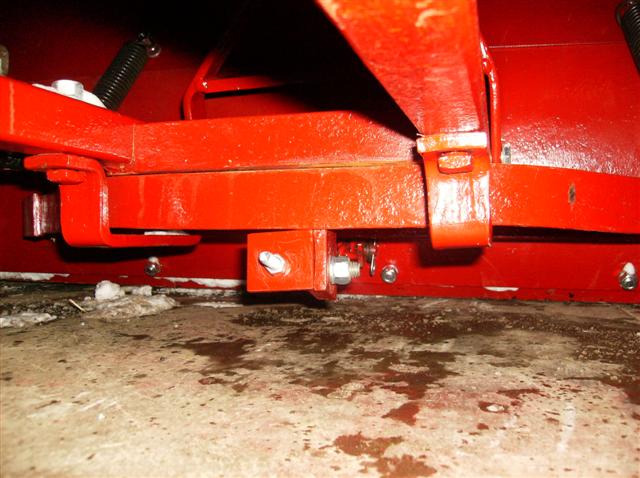 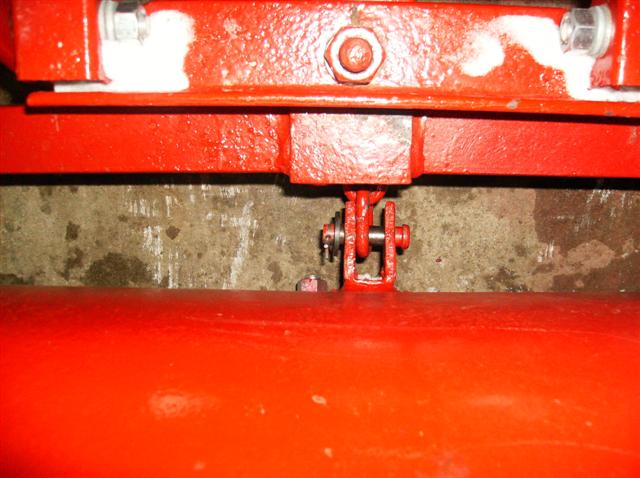 The new return springs I fabricated from a heavy garage door spring and are attached to the angle support bracket with two 3/8â€ eye bolts and I used a pair of coupling nuts that I drilled a hole through to anchor the spring on the blade. The springs and attachment method may change but seem to work well. I will probably change to a little stronger springs but I want to use it more first.
I did get to plow a little snow with it and was very pleased with how well it worked. More snow is predicted for tonight and this weekend so Iâ€™ll be better able to give feedback later. 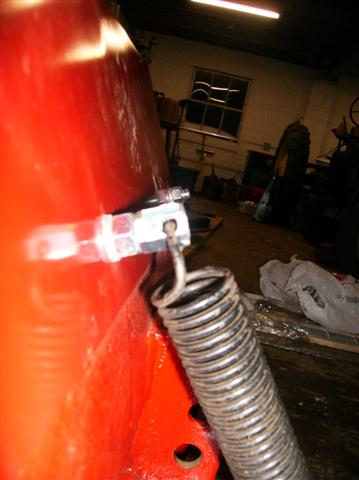 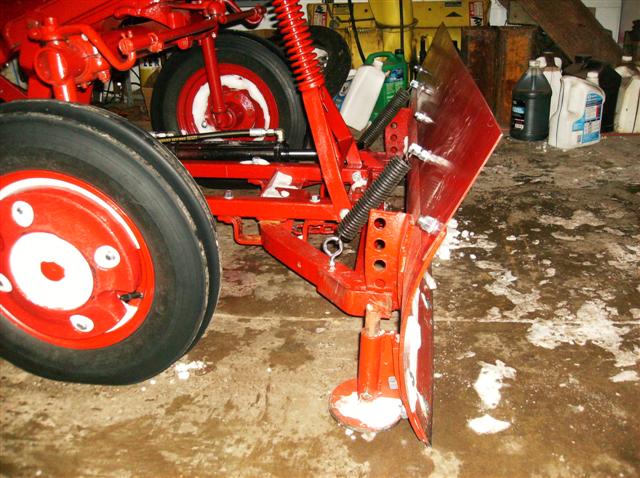 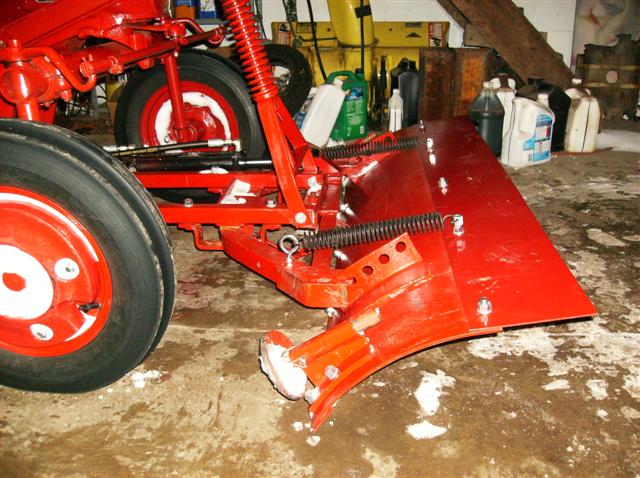 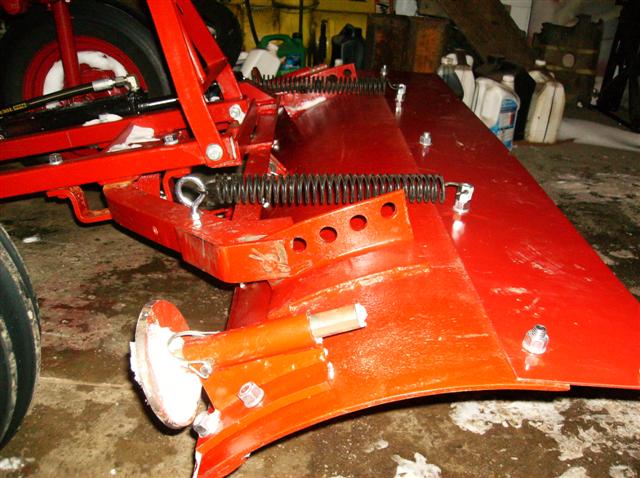 To convert the snowplow back to a leveling and grader blade will only require the replacing of the chain and bracket with the original relief spring assembly and possibly moving the pivot pins back to the center hole. The only drawback is that I won't be able to pitch the blade as might be needed to crown a road or driveway. Seems like a small trade off to me.

Due to the failure of the formed 3/8" eye bolt, I have upgraded to a 1/2" forged eye bolt as Rudi suggested. I also replaced the earlier bracket that anchors the eye bolt with a beefier angle iron bracket and added a gusset to increase its strength. The original bracket was made from 1/4" X 2" X 2" angle iron cut 1 3/4" long. The new bracket is 3/8" X 2 X 2 1/2" angle iron cut 1 1/2" long with the gusset added to the top of the bracket (see photos). To attach the chain to the eye bolt I used a cold shut link similar to what Bigdog suggested. The cold shut link is rated higher than the lap link so I went with that.
My confidence is pretty high that this set up will work well. The previous set up was real close but allowed the aforementioned parts to yield.
I will order some heavier springs today also. After much consideration I have determined the springs that I feel I need to dial this set up in just where I want it. More on that later...... 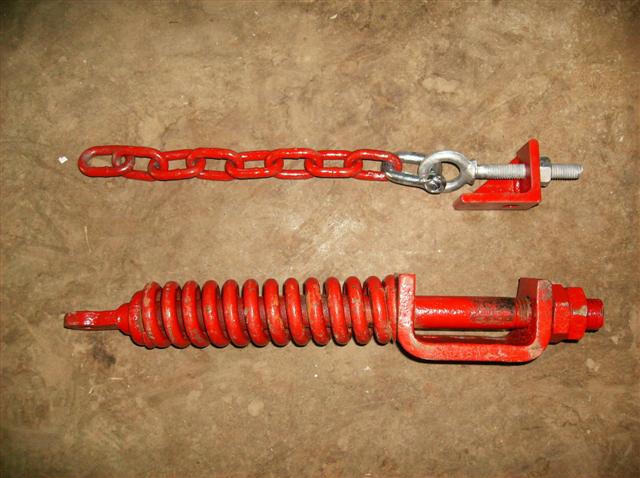 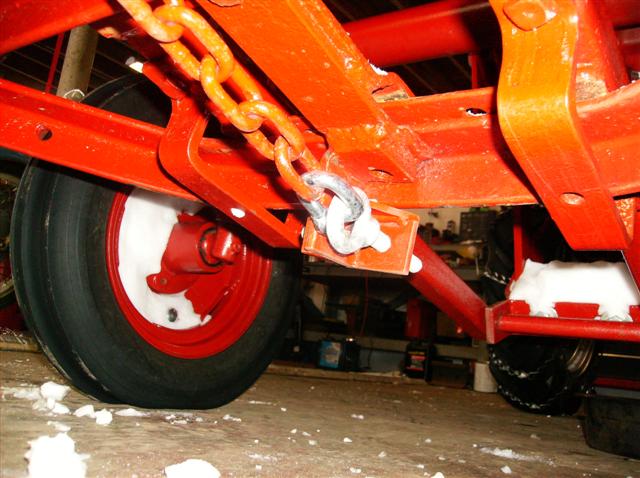 This is the final update on the grader blade to snow plow conversion. Having used this modification for awhile it is evident that it is a very good upgrade over the grader and leveling blade when it comes to snow removal. It has eliminated my fear of snagging something with the cutting edge of the blade and breaking something. I changed the return springs to a heavier rate and think that it is just about perfect. I thought if there is any down side to the conversion it would be losing the ability to scrape the packed snow and ice off my concrete driveway. That has not proven to be an issue. There are a few times that the blade has tripped when I was trying to do that but it was evident to me that had the blade not tripped it would have stopped the tractor in it's tracks anyway.
The new springs (McMaster-Carr # 9654K476) added just the right force needed to fine tune the set up. When an obstacle trips the blade I disengage the clutch and the return springs with the leverage provided by their mounting on the blade will actually push the tractor back as the blade is righting itself so all I have to do is let the clutch back out and away I go.

To show it in operation and provide some pictures here, I drove a long bolt into the frozen ground leaving about 1/2" sticking up above the ground. My daughter Ashlynn operated the tractor while I took the following pictures.

Here she is starting to push a little bit of snow. 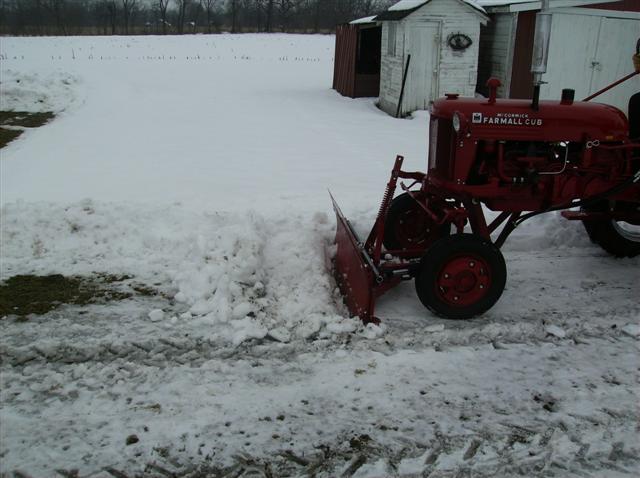 When the blade hits the bolt that I pounded into the ground it catches the edge of the blade and instead of bringing the Cub to an abrupt stop, the blade trips and passes over the obstruction, saving the Cub or plow from possible damage. 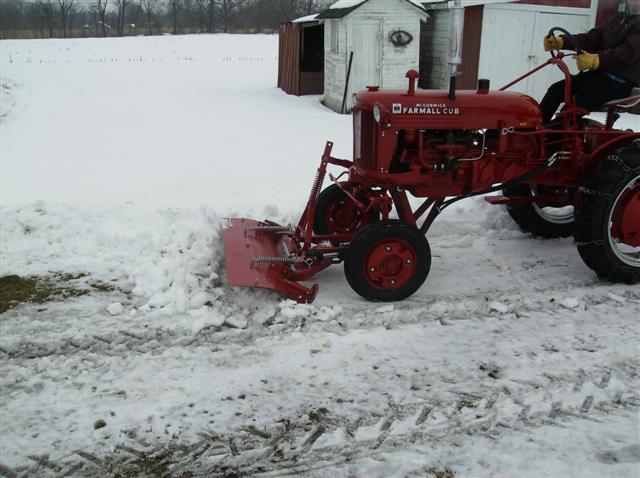 As soon as she sees the blade trip she presses in the clutch. Since the Cub blade does not float (being held in a location by the hydraulics) the blade will actually push the Cub backwards as it rights itself. Once the blade has righted itself, just let out the clutch and away you go.
If the Cub only had lifting pressure it would probably hop once over the obstruction and snap right back but the Cubs hydraulic system has both up and down pressure. 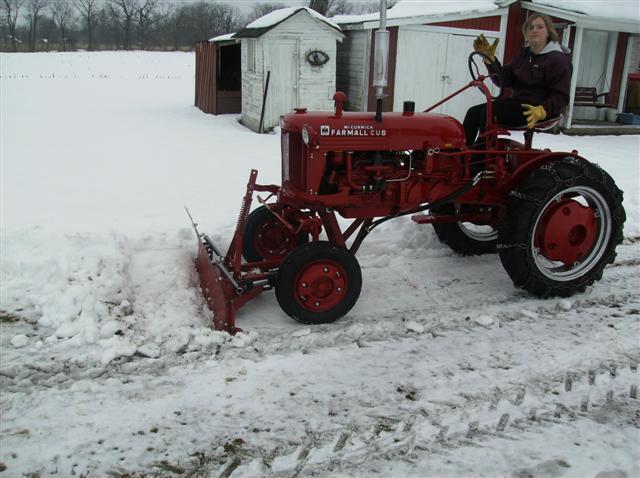 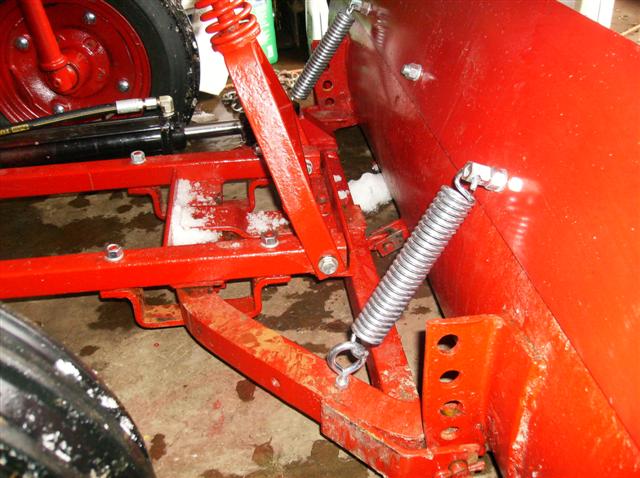 The only thing that I noticed was one of my eye bolts appears to have a little lean to it and might end up being increased to a 1/2" instead of 3/8". Other than that I am real happy with the modification and can plow with much more confidence and a little more speed without fear of something bad happening to the plow or my Cub. The total cost of the conversion was less than $50.00. The springs were $15.04 each, the forged eye bolt was about $7 and the other eye bolts were under $2 each. I don't remember what I paid for the short length of chain but it couldn't have been more than a couple of bucks. When you get chain make sure will allow a 1/2" pin to pass through the links so that it can be pinned to the bracket on the blade. The angle iron I used for the bracket was just scrap material I had available to me.
If you plow snow with your grader & leveling blade and find yourself catching obstacles from time to time and fearing you're going to break something, this is a good, easy and simple conversion to consider.
Last edited by ricky racer on Wed Jan 06, 2010 9:57 pm, edited 1 time in total.
1929 Farmall Regular
1935 John Deere B
1937 John Deere A
1941 John Deere H
1952 John Deere B
1953 Farmall Cub
Top
1 post • Page 1 of 1