Forum rules
Notice: For sale and wanted posts are not allowed in this forum. Please use our free classifieds or one of our site sponsors for your tractor and parts needs.
47 posts

Tell you what, if this thing starts, just bring it to DSCF and we'll do it together!

sooner or later you are gonna make this thing run. I think all of us reading this thread know this!

better to have it and not need it than to need it and not have it...( YES this includes CUBS! )
Top

Dale Finch wrote:Tell you what, if this thing starts, just bring it to DSCF and we'll do it together!

Quote by Gary Pickeral I like
"If it can cast a shadow, it can be restored"

You know why I have that big smile on my face? It's because I finally got the '50 SA running!!!!

I took a short video of it, but will need to figure out how to post it...later...time for celebration, so heading to my sister's for a glass of wine!

When I initially tried to start it, no go. So pulled coil wire and no spark. Removed the kill switch wire, and nice bright spark. Tried to start again and varoom!! Started right up with good oil pressure and decent response of both touch control levers. (Hadn't checked fluid but worked fine)

I was still using a pony bottle, so after running for a few minutes, it ran out of gas so never had to try to shut it off! Think I'll let whoever buys it change out the kill wire...buried between the battery and the panel...their problem!

I was truly thrilled, and want to thank you ALL for your help with this task. Also, thank you, Bob M. for sending me your home made replacement for the condenser cover...it looked great and worked like a champ! Too bad nobody will see it, since it's on the engine side of the mag!

But you and I know it's there!

Quote by Gary Pickeral I like
"If it can cast a shadow, it can be restored"

I THINK I figured out how to post a very mediocre video! I mainly wanted to PROOVE to myself, and you folks, that it REALLY DID run!!


And this one shows the hydraulics work, front and back!

And I'm STILL grinning with pleasure! (and relief!!

Finally downloaded the latest photos from my camera, and here is the part that Bob McCarty made for me...THANKS, Bob!

Very nice! I assume the owner heard it running right? Bet she was impressed!
Quote by Gary Pickeral I like
"If it can cast a shadow, it can be restored"

Her brother in law was there...he was operating the hydraulics. Not sure where she was...I seldom see her. But I assume he will let her know.
Dale Finch
'56 Cub Restoration

Did you say "It lives!" in a Dr. Frankenstein type voice?
Top

That little cover came out nice.
I must of missed the part where you ended up missing that. Was it missing all along or did it vanish during your project?
I’ve had more than a few of those moments, “

Oh come on!” Then spend (waste) half a day looking for it to give up, and go inside. Paula’d ask and say I’ll bet I can find it, and she usually does

Happens so often I feel like I’m caught in a Bill Murray “Ground Hog Day” loop.
Quote by Gary Pickeral I like
"If it can cast a shadow, it can be restored"

That condenser hole cover was already missing...only saw that after the mag was removed. Pretty much all it does is keep grunge out, but when the kit came with a new gasket for that cover, I figured I really should replace it. I had already tried with the only metal I had...a soup can!! Unfortunately, it was too flexible, and wouldn't stay down against the gasket, aggrevated by the fact that both screws are at one end.

BTW, even though the kill switch/wire HAD tested good with an ohmmeter, I KNEW the insulation on the wire was badly cracked, and had already made a notation to whoever buys the tractor, that it needed to be replaced. Oh well...at least the mag is all spruced up, even if it wasn't the no-start culprit. Oh, and the gears WERE one tooth off...

That condenser hole cover is part # 55015D. The original has an area that protrudes outward but I don't know what the purpose of that is. 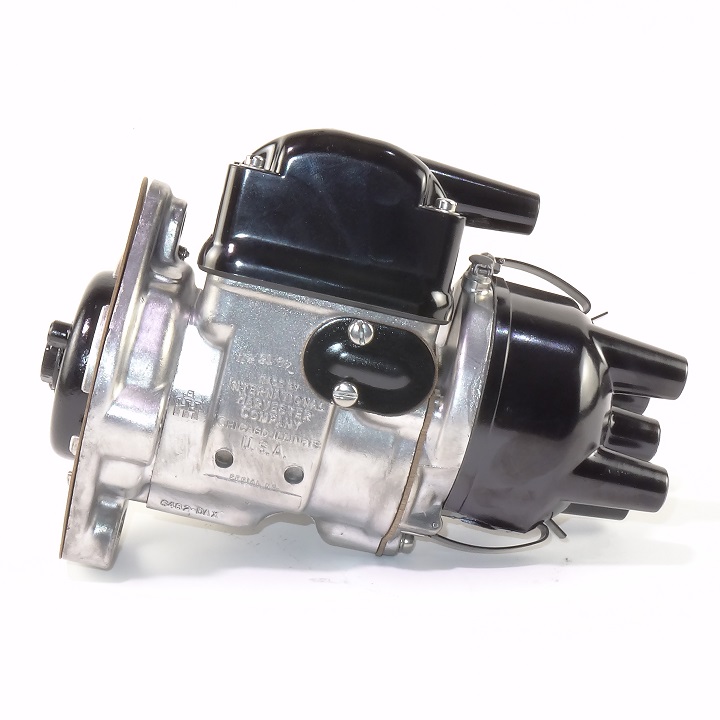 indy61 wrote:. . . The original has an area that protrudes outward but I don't know what the purpose of that is.

I always assumed it was a stiffener because the screws had to be offset towards one end.
Top
47 posts