Forum rules
Notice: For sale and wanted posts are not allowed in this forum. Please use our free classifieds or one of our site sponsors for your tractor and parts needs.
9 posts • Page 1 of 1

I'm trying to get my battery box sorted out. Where exactly did the battery ground strap bolt to the tractor? I've looked thru the manuals and checked pics online, but haven't found one showing which bolt the ground strap is attached to. I know it can be bolted pretty much anywhere, but want to know where it was attached originally.

Also, one pic in the Ops manual (illustration 18) shows the cable to the starter exiting through the notch in the upper front corner of the battery box side plate. In this pic it looks like the starter cable has a thick insulator on it where it's in the battery box........but I don't see any insulator shown in the parts manual or in the wiring diagram. Was this insulator real or maybe it's a pre-production pic?

post a picture of what you're talking about. I know originally a 140 (not sure what year it started) had a rubber boot over the (+) terminal too. I've had a several of them with original wiring. I am pretty sure the battery ground either bolted to the upper battery box bolt, OR the bolt holding the steering support/dash to the torque tube. I am thinking it was the latter.
Regards,
Chase
205-368-5339
ihfarmallrtr@gmail.com

Here is a picture of a VERY original and lightly used late-1978 Farmall 140 I had (it even had factory painted oil filter on it when I bought it). It shows the original battery cables and possible original locations (I didn't move them). I also included the best picture of the side showing them going to the starter......if you can make it out. I think the battery cable going to the starter might have been moved, as I think it was routed up by the gas tank bolt and down behind the hydraulic lines. Hope this helps!

Maybe these pictures will help on the cable to the starter. These pictures are from an original looking 1968 Farmall 140 tractor I refurbished. Keep in mind that I'm not sure if any changes to cable routing or mounting changed during the Farmall 140 production. This model was a push button start, 12 volt generator system where the 1978 model had a key start solenoid mounted at gas tank and was a 12 volt alternator system.

Thanks for the pics! I'm pretty sure you've got the starter cable routing right in that last set of pics. Per the pics in the manuals it exits the right front top of the battery box (thru the notch in the right side cover), thru a clamp on the bottom of the gas tank mount, then behind the hydraulic lines and to the starter. Mine was routed wrong, but will be fixed later today.

As for the ground strap.........the pic in the Ops manual shows the battery installed in the tractor with the lid off the box, but it's not possible to tell where the strap is bolted. It doesn't appear to cross the top of the battery like yours, but that's because the battery is installed 180 from the way you have it in there. On my tractor the ground strap was bolted to the top center bolt on that thick plate at the back of the touch control unit. From the pic below you have to look real hard, but the ground strap immediately twists to vertical and then disappears behind the battery. So I'm guessing it either bolted to the bolt mine's bolted to or another bolt near the front of the battery box. I've included the two pics from the Ops manual that shows that thick insulator on the starter cable (circled in yellow) where it goes thru the battery box. But the funny thing is the pic of the battery box with the cover off has the starter cable without this thick insulator......so that's why I was thinking it might be pre-production.

One thing I figured out quick is that the group 26 battery I installed can slide back toward the control panel and the positive terminal can contact the bolt that holds the top of the right battery side on. So I put a piece of one-by that fits between the bottom of the battery and the back of the dash. The way you have it mounted would only allow the neg terminal to contact that bolt, which wouldn't do any harm. I'm going to flip my battery like you have yours. 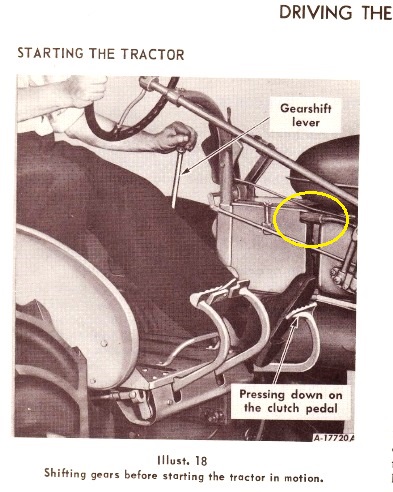 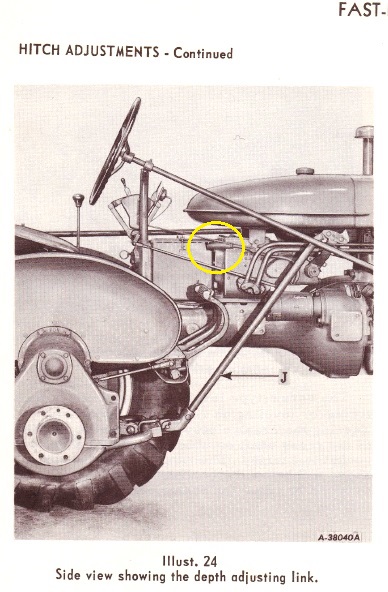 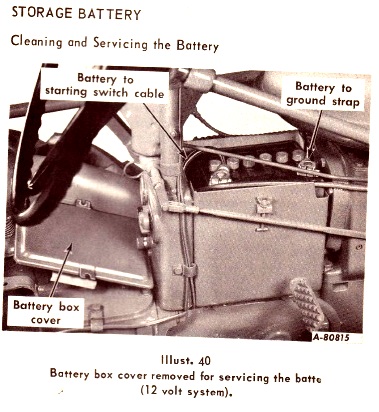 I notice that the "140" in the pictures in the manual show a Farmall 140 style starting system (no pull rod and push button) but it shows it to have a Farmall 130 spoke steering wheel. Not sure, but maybe early 140s still had that steering wheel from the factory. I recall seeing that rubber on the battery cable now that you mention it. If I had to guess it was slid on there before the ends were on. You could always get something similar, split it, and secure it with zip ties. I'm sure some a/c pipe insulation would work well for the same diameter as the battery cable.
Regards,
Chase
205-368-5339
ihfarmallrtr@gmail.com

Yeah, I've got some hose or foam tubing around here that would do the job. Do you now if the battery and starter cables are 2 AWG or 4 AWG? I know my battery cable has been replaced, as it's 1/0 AWG and way too thick for the application. I'm thinking 4 AWG is a little light for this application. My starter cable seems to be original.....but I wouldn't bet my life on it. I think they're 2 AWG, but can't find that written anywhere.

Yeah, I've got some hose or foam tubing around here that would do the job. Do you now if the battery and starter cables are 2 AWG or 4 AWG? I know my battery cable has been replaced, as it's 1/0 AWG and way too thick for the application. I'm thinking 4 AWG is a little light for this application. My starter cable seems to be original.....but I wouldn't bet my life on it. I think they're 2 AWG, but can't find that written anywhere.

I hear ya. Funny thing........I've checked all over the internet for the wire size of the OEM cables from IH and no one seems to know what they are. Seems everyone wants to jump to huge welding wire cables despite the fact that the originals were much smaller. I'm going to measure my starter to push switch cable, as I'm pretty sure that's an original cable. The battery to switch cable should be the same size, as it wouldn't make any sense if it was different. I'm pretty sure it's 4 AWG, but will check. I've got the techs at work making me up a new set of cables now, so I'll go see what they're using and measure the original.