The Cub Club -- Questions and answers to all of your Cub related issues.
Forum rules
Notice: For sale and wanted posts are not allowed in this forum. Please use our free classifieds or one of our site sponsors for your tractor and parts needs.
21 posts

There are a lot of times visitors to this site wonder how much it costs to rebuild a Farmall Cub C60 engine. I'm currently in the process of rebuilding the engine of a late 40's Cub so I thought I'd list the costs of my rebuild. Keep in mind, I'm doing all of the mechanical work myself and only farming out the machining of the block. Every rebuild is slightly different so you mileage may vary.

I purchased this Cub for a forum member who didn't adequately protect his investment with a 50/50 antifreeze/water solution. It appears that the engine was recently rebuilt prior to the block freezing and breaking. When I purchased it, I hoped the block would have an external crack that I could possibly repair. That was not the case. The block had internal cracks so a repair was out of the question. Now, I wouldn't normally buy such an unknown specimen but I had an ace in the hole. I had a spare Cub engine setting in the barn. Doesn't everyone have a spare engine setting in their barn?

So, off comes the head which reveled stuck valves which was no surprise at this point. I measured the bores, which were still standard size. The cylinders were worn .007" over nominal. A lot of guys might have just added new rings and called it rebuilt but I couldn't do that in good conscience do that.

The crank in the spare engine had been turned .010" under but was badly worn. The crank in the cracked engine was also turned .010" under but was was really nice and measures spot on so it is going in the reworked engine along with the connecting rods. The pistons in the cracked engine are fairly new, .030" over cast iron pistons in like new condition so those are going into the spare engine. I took a piston along with the engine block to the machine shop so the bores could be fitted to the pistons. I also had the block cleaned, valves and seats ground, new valve guides installed and the block decked. Since I couldn't find any .030" piston rings, I had the machine shop order a set for me.

The costs for these services are as follow but keep in mind, costs may vary in your area:

Now keep in mind, the crank didn't need to be ground and I didn't have to buy pistons. I still need to buy bearings, seals and gaskets. I'll be ordering those from Hamilton Bob later this week. Those should run me around $230 or so. A few bucks for assembly lube and Permatex, etc., and I'll have about $675 in the rebuild doing all of the mechanical work myself. Once the Cub is back together, it should make someone a nice little tractor that should run well for another 60 years with a little care and maintenance.

I started the build today by painting the engine block and installing the cam, lifters, valves and setting the valve clearance. I really enjoy the building portion of a rebuild.

Here's the engine block before I started reassembly today. 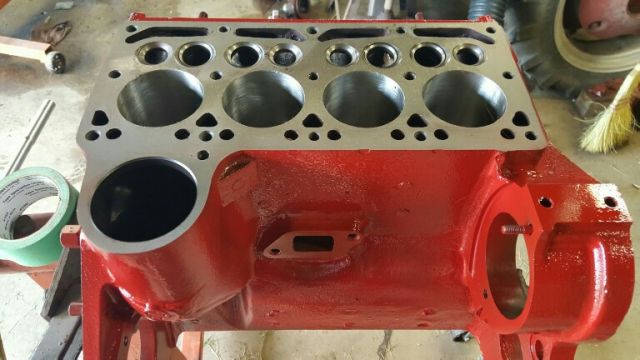 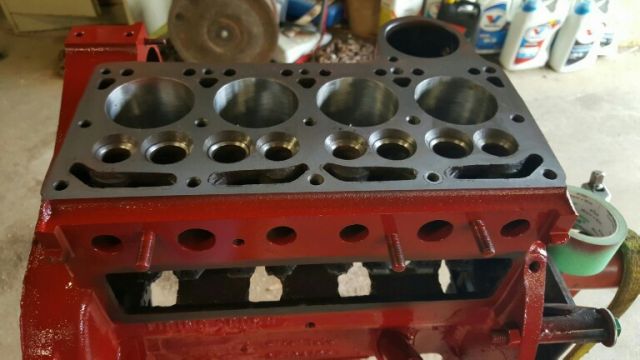 I know you are a long way from finished, and it's looking great, but don't overlook the need to remove paint from where the starter bolts onto the block. Of course, I KNOW you would have remember!!

I so love the look and feel of nicely machined metal!! Guess I'm a wierd lady, eh?!
Dale Finch

Sure is pretty with fresh machining and paint

How about the cam did you replace it?
Top

Jackman wrote:Sure is pretty with fresh machining and paint

How about the cam did you replace it?

Aaand all the oil galley plugs were in place before inserting the cam. Don't ask how I know

Ricky I think that is a lot of machining work for $425.00. I am not sure I could get that workscope done my way for that. I am sure like your other projects this will end up being great!

Did you do a compression test before tear down? I would like to see compression numbers on a fresh rebuild.

Good luck.
When you only have 9 horsepower you need to know the names of all of the ponies!
Top

inairam wrote:Ricky I think that is a lot of machining work for $425.00. I am not sure I could get that workscope done my way for that. I am sure like your other projects this will end up being great!

Did you do a compression test before tear down? I would like to see compression numbers on a fresh rebuild.

Prior to the tear down, I had no compression on any cylinder due to stuck valves. Until the rings seat, I don't know how accurate the compression tests might be after the build.
1929 Farmall Regular
1935 John Deere B
1937 John Deere A
1941 John Deere H
1952 John Deere B
1953 Farmall Cub
Top

I just rebuilt one last winter. Was more than it cost me.to buy the tractor.

I need to move to where you all live. I'm being quoted double and TRIPLE those prices for the same amount of machine work. I feel like shops are giving me their "we really don't want to do this job" pricing.

jaydepinto wrote:I need to move to where you all live. I'm being quoted double and TRIPLE those prices for the same amount of machine work. I feel like shops are giving me their "we really don't want to do this job" pricing.

I don't have the price breakdown handy, but we had the following machine shop work done this year at a local engine shop:

clean the block
bore block to fit pistons
deck block
install one valve guide insert, grind all valves
install valve guides
grind crankshaft (they shipped that out to a crankshaft specialist)
weld up a dent in the top of the block from a glancing sledgehammer blow (should go into a lessons learned post)
remove broken tap from crankshaft (also lessons learned)

There are not a lot of shops around here (southern Ontario) that claim to be able to do this work. We found three within a 50 mile radius of us, and the one we went to was the only one consistently recommended by anyone we spoke with. That shop does a lot of high end car engines, I think they were amused by our old flathead. Good shop though, I'd recommend them to anyone.

We bought new pistons, rings, valve guides, valves, all new bearings, bought a better used camshaft... we spent more in parts than at the machine shop. Some parts were not available in Canada, we had to have a relative pick some up in the U.S. and some we had them shipped from other suppliers to Buffalo and then drove across the border to pick them up.

We've been at auctions recently where running IH tractors (not cubs, but A's, etc.) go for less than half of what we spent on the engine (supply has overtaken demand in our area). But we are doing the restoration for fun and learning, not for profit.
Top

Been waiting to add to this thread since my 5.8 Ford marine engine has been at the machinist here in the NW suburbs of Chicago-

One of the ironic things to me was that he said parts for these 351's are starting to get hard to find. For instance he had to call several suppliers for the rings- catalogs show they have them but what happens is that they make a run of them and when they are out they are out until they decide to make them again which can be awhile. I guess the same with pistons but in this case it was no problem. Hope this isn't the case with the Cub when it's time.
Top
21 posts